« Many people already eat insects in the developing world, but they usually collect them in the wild, » said Yupa Hanboonsong, technical director at the FAO for the edible insect project and entomology professor at the University of Khon Kaen in Thailand.

« It would be better if they were raising insects in their gardens. » 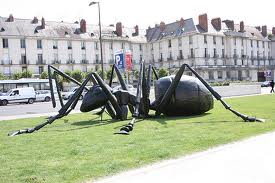 A market for insect food is gradually developing in Europe. In the Netherlands, the producers of insects formed the Dutch Insect Breeders Association. They currently produce tens of tons of mealworms, some of which are bred for food for humans.

To start your own small production you just need the motivation to get going, some basic equipment and a little patience. The easiest way is to start with domestic crickets, which are also excellent to eat just grilled. Are you ready? Let’s go!

• A terrarium with a capacity of at least 75l, with a metal screen on top. Find a container that is tight, well-ventilated and easy to clean. Choose a transparent container so that you can observe the insects. A glass vivarium, an aquarium or a single recycled plastic box, fitted with a wire mesh fine enough as a lid, is ideal. It is recommended not to exceed the standard of one cricket for every 2.5 cm ². A vivarium of 90 litres or the equivalent of 75 cm X 30 cm X 30 cm can house a population of 300 to 500 crickets..

• A hiding place. A carton or piece of cardboard as shelter in the container so they do not eat each other.

• A small trough: a bottle cap filled with a sponge or cotton soaked with water, so that they do not drown.

• A small nest, for example a shallow glass jar, filled with soil (without fertilizer) and sand, with a metal screen on top to protect the eggs. It should be sprayed daily to prevent the eggs from drying out.

• A 40W light bulb to maintain a heat of about 30 ° to increase the performance of the insects. This is optional, as crickets live and breed very well at a room temperature of 20 ° C.

The behaviour of crickets is influenced by vibration and lighting. Choose a quiet and stable vivarium, which can receive an average of 12 to 14 hours of light per day, in order to promote the development of the insects. However, make sure you do not place the terrarium in bright sunlight.

The nest boxes, troughs and containers should be cleaned regularly to prevent invasion by mites. 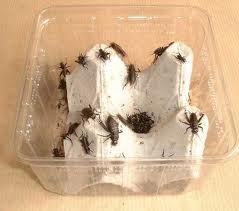 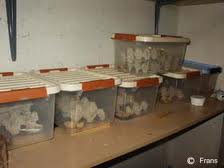 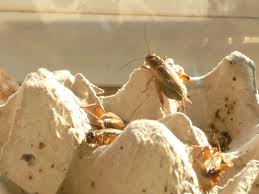 • There should be at least ten females and ten males to start with. These can be bought at pet stores. Be careful, crickets sold in pet stores are not intended for human consumption. It is therefore necessary to feed the crickets purchased until they breed and only eat insects bred from the farm. The domestic cricket is fully grown after two or three months and lives in total for between four and six months, when kept at a temperature of around 25 to 30 degrees.

Cereals, fruits, vegetables … dry pet food may be added as a protein intake for the crickets, to avoid cannibalism.

The female lays between 100 and 300 eggs. Every one to two weeks the nest box must be replaced by another nest. The first nest box is then placed in another box identical to that of the adults, heated to between 25 and 30 ° C. The bottom of the nest should be kept slightly damp. After one to two weeks the first eggs hatch. They will need hiding places and a trough like the adults, and also fish flakes as food. As and when they mature they can be fed as adults. The cricket reaches the adult stage after two or three months, after several moulting stages.

Before cooking, crickets should be killed by freezing them alive for 48 hours. They can be stored for a few months in the freezer in airtight containers. Defrosted insects rapidly deteriorate so it is better to take them out at the last minute and rinse them under running water before cooking. Do not eat insects which seem to have a dubious quality, for example where there is an unusual smell or colour, or where there are signs of decomposition.

Thawed crickets can be used in the preparation of several dishes. recipes here